Does it Make a Difference What Units We Bill in…?

Last week I had an interesting conversation with a customer who was dealing with an irate customer of hers who had taken his complaint before the board. It seems that this gentleman was upset because he thought the utility was billing him incorrectly. So, what were they doing wrong…? Billing him in thousands of gallons, so he contended!

Our customer had to prepare a response to her board and had two questions:

Billing in gallons as compared to thousands of gallons

We discussed the issue for a few minutes and she had a good grasp of the difference between billing in thousands of gallons and billing in gallons. Namely, when billing in thousands, the customer is the beneficiary of a deferred billing for any usage until the meter rolls to the next thousand gallons. In the illustration below, the customer is only billed for 4000 gallons when the actual usage is almost 5000 gallons:

However, billing in thousands can work to the customer’s disadvantage if the previous reading was just less than the next thousand and the current reading is just more than another thousand. In this illustration, the customer is billed for 4000 gallons when the actual usage is just over 3000 gallons:

Obviously, if you are currently reading and billing in thousands of gallons, there is no way to go back and know what the actual reading was in gallons at the time the meter was read. So, unless the customer read his meter at the same time as the meter reader, there is no way he could have known if he was being billed more or less.

So, let’s conduct an experiment…

I happened to have actual reading data, in gallons, from another customer’s conversion a few years ago on my laptop. So I decided to use that data and calculate a year’s worth of charges using the rates of the customer who called.

Those rates are pretty straightforward – the base charge of $25.00 includes 2000 gallons and all usage over 2000 gallons is billed at $4.00/thousand gallons.

Results of the experiment…

Below is the billing detail for the account that was billed more in gallons: 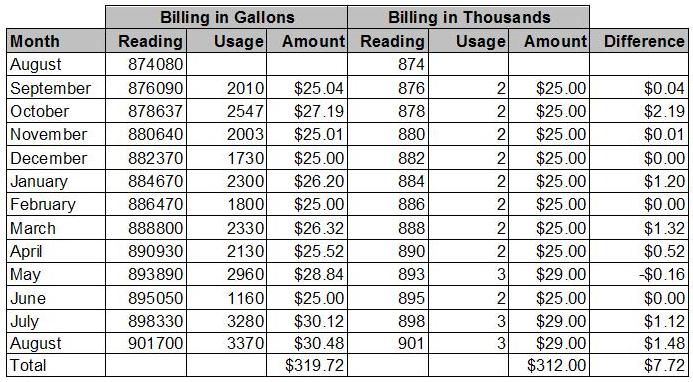 Below is the billing detail for the account that was billed more in thousands of gallons: 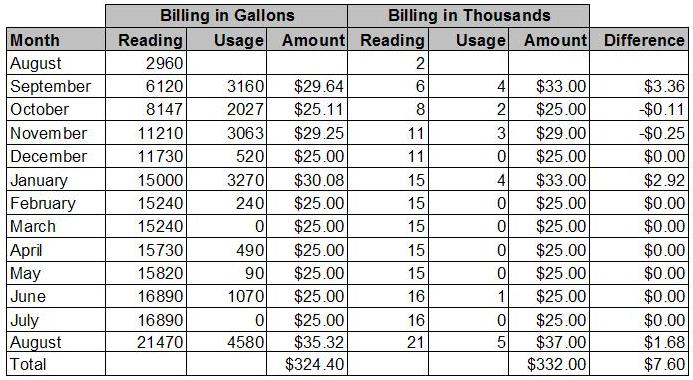 As you can see, it’s pretty much a toss-up as to whether the customer or the utility benefits from billing in gallons or thousands. In some cases, the customer benefits and in other cases, it works to the customer’s disadvantage.

Why would a utility change billing units?

If you’re already reading and billing in gallons, I can’t think of any reason to change to a larger billing unit.

If you’re billing in thousands and considering changing to gallons, I would only recommend doing so if you have a reason other than pacifying an upset customer! The best reason I can think of is if you are moving from reading with handhelds to some form of automated meter reading, either drive-by or fixed base.

An excellent time to make the switch from billing in thousands to billing in gallons is the conversion to a new billing system.

What would be involved in changing from billing in thousands to billing in gallons?

If you were to decide to change from billing in thousands to billing in gallons, the following data fields would have to be changed for each account in your billing system:

How many other utilities bill in thousands of gallons?

To answer this question, I turned to the 2010 North Carolina Water and Wastewater Financial Practices and Policies Survey conducted by the Environmental Finance Center at the University of North Carolina and the North Carolina League of Municipalities. This survey tallied the responses of 277 utilities across North Carolina about their financial practices and policies. Even if your utility is not located in North Carolina, this document is filled with useful and insightful information.

The following graph appears on page 3 and answers the question, “At what level does your utility round measured consumption to calculate bills?”: 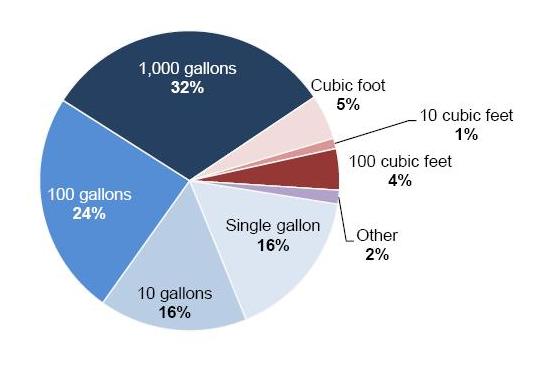 If you have any questions about reading and billing units, please give me a call at 919-673-4050 or e-mail me at gsanders@edmundsgovtech.com.

Could Your Office Benefit from a Callm Cubicle…?
Since the onset of COVID, my time spent in utility offices has been practically non-existent, so I ...

Invitation to Participate in the 2022 Utility Staffing Survey
Have you ever wondered if your office is understaffed…? Do you need to justify a new position ...

Meeting Senior Citizens’ Payment Needs
If you read my last blog post closely, you may have been as surprised as I was ...